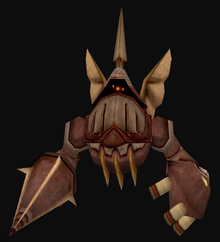 For quotes regarding this monster, see Steve's Quotes or Monster Quotes.

In Dark Cloud, Arthur is fast, powerful, has lots of HP, and quickly wears down a weapon's WHp bar. It can be difficult to fight at close range, as it will lunge with its spear, dealing massive damage and causing knockback. Ungaga is probably the best character to use at close range, since his spears reach the furthest. Using a ranged character is the safest way to defeat it, though it can still defend at times.

In Dark Chronicle, Arthur is heavily armored, moves fast, and hits hard. It has three attacks, the first is a far-reaching lunge with its lance when in melee range. The second is a ranged attack, in which it will fire rockets that home in on its target from a distance. The rockets are identical to the ones used by the Ridepod's Missile Arm. Its third and rarely-used attack is a swift punch with its other hand. The Arthur only performs this move when you are very close to it adjacent to its non-lance arm.

Arthur is vulnerable to Lightning. A Lightning Stone will instantly kill it (and all other variations of this monster). Otherwise, it's best to use ranged attacks (preferably with a high Lightning stat), or a powerful Ridepod arm, such as the Nova Cannon or Samurai Arm. If your Ridepod is not upgraded sufficiently, a steady barrage of Monica's magic or Max's grenade launcher is your best bet to safely deal with it. If you are gutsy enough to use Max's wrench, use only one or two hits and stay near its lance arm and strafe. Staying near its other arm is likely to be met with unpredictable punch.