Dark Chronicle (known as Dark Cloud 2 in the US) is an action RPG by developer Level-5 Inc. for the Sony Playstation 2. It was originally released in Japan in September of 2002, with later releases in North America months later in February 2003, and in Europe in September 2003. It is a spiritual successor to Level-5's Playstation 2 game Dark Cloud, and widely incorporates many of the original titles gameplay elements such as rebuilding areas with the Georama system, clearing dungeon floors, fishing, and building up weapons.

While there are many direct references to the original, the story, setting, and characters are completely unrelated to the original. Players control two completely different protagonists Maximillian and Monica. Many features from the first game return, such as Town Building with Georama and the Atlamillias. Many items, locales, and four original characters such as Master Utan also appear once more in various ways.

Set in 1950, the story centers around Max, a young inventor who lives in the town of Palm Brinks. Max works at Cedric's workshop, where he spends time away from his father. In the beginning of the game, Max receives a ticket to Flotsam's Circus Troupe, a circus act in Palm Brinks. While there, he overhears a conversation between Flotsam (the ringleader) and Mayor Need about the "outside world" and the Atlamillia stones, and is attacked by Flotsam's clown army. Discovering that Flotsam has been threatening and bribing the mayor, Max runs from Flotsam and his clowns who try to take the Atlamillia pendant that Max's father gave him. Max escapes, concerned about Flotsam and the mayor's conversation about the outside world, a place he previously had no knowledge of.

Max manages to get away from Flotsam's henchmen by hiding in the sewers, where he tells his friend Donny that he believes that this is the opportunity to see the outside world that he was previously ignorant of. By fighting his way through the sewers and escaping monsters, robots, and Flotsam, Max gathers together his mechanic partners and his mentor Cedric and boards a train out of Palm Brinks. Flotsam chases them down, and attempts to blow up the train, but he is stopped by a young Sixteen  16-year-old girl named Monica. Monica lives 100 years ahead of Max's time. Her father, King Raybrandt was assassinated by the Dark Assassin Gaspard. She knows a lot about what is going on in the world and is able to explain to Max about the Atlamillia.

Together, Max and Monica journey through the many villages devastated by Griffon, rebuilding each of them and ultimately restoring the future in order to defeat Griffon. The four towns that Max and Monica visit are Sindain, Balance Valley, Veniccio and Heim Rada. Each city has a dungeon, in which you defeat monsters and retrieve Georama materials from.

Max and Monica meet a Firbit tribe in Sindain. The Firbits are reluctant to let them into their house (they don't trust humans) but Monica tricks them with a promise of grape juice (which Firbits can't resist). The Firbits have an ability to create towns by building houses, trees, etc. using a machine called to Carpenterion, which is powered by Geostones. These Geostones are found in dungeons. By rebuilding the past, Monica's time is completely restored as well.

In the game's optional epilogue, Need asks Max to find some Zelmite ore to fuel Blackstone One. In the mine, Max is reunited with Monica, who has used a Starglass to travel back in time. Metal Flotsam attacks them; they defeat it and reach the end of the mine. They find the Zelmite and the Dark Genie from Dark Cloud attacks them. They defeat him and return to Palm Brinks with the ore

The process of rebuilding villages throughout the game is done via Georama mode. The player advances through dungeons, defeating monsters and collecting Geostones. Geostones allow the player to build new structures and items within the world, and certain conditions must be met in order to properly rebuild the future.

The various recruited Support characters may be moved into the buildings placed in Georama areas. Some people want certain additions to their houses (for example, Gordon wants to live in a house next to trees, because he's a botanist). Some people are required to live in certain villages to fully rebuild the future.

The player can build the villages in any way they desire, so long as they rebuild the future enough to allow the story to progress. If the future of the village is completely restored, you'll receive a reward, usually a new, rare weapon.

There are various NPC's who may be recruited through the game. Most of these people will only join you if you meet are able to fulfill certain requirements (for example, Aunt Polly, a baker, needs you to deliver bread to a villager's house).

In order to rebuild the future, the player must collect Geostones, which are only found in dungeons, which are found in new areas during the Chapters of the games as the player progresses through the story.

Each dungeon consists of a varying number of story segments and Floor Episodes, each with their own unique names. With every dungeon, the number of floors increases, and the monsters become more powerful. When a characters HP hits0 they will become incapacitated and will only be revived after completing that current Floor Episode and exiting the dungeon or by using a Resurrection Powder, which is only obtained late in the game. If the HP of every available character hits 0 the player will receive a Game Over and be returned to the Title screen, where they will then be able to load their last[Save file.

Each floor is a randomly generated, consisting of an entrance, an exit, various monsters and treasure chests. In order to advance to the next floor, you must find the Gate Key, and the type of Gate Key is unique to each dungeon (Red Meat for Starlight Canyon, Rope for Mount Gundor, etc.). One monster on each floor holds the Gate Key, but you have to keep defeating monsters until you find it (you won't know if the monster has it until it's defeated).

Treasure chests are scattered about each floor. They can hold anything, from weapons to Georama materials. Some can also be empty. Others are disguised Mimics, which will attack you upon opening the chest in which they dwell. Mimics are usually found toward the end of a dungeon.

The last floor of every dungeon is a boss battle. Sometimes, you require certain items from the future in order to find and/or defeat this boss. The battle itself requires more skill and strategy than a battle with a dungeon-dwelling monster. Defeating this boss allows you to advance to the next chapter (village) in the story.

Every floor gives the player an opportunity to collect medals. Medals can be used to purchase special items later in the game. You can obtain these medals by clearing a floor of monsters in an allotted time, for example. Some floors allow you to fish when all monsters are defeated. If you catch a fish that exceeds a certain length (cm) you can receive a medal. Medals are also awarded for successfully completing a round of Spheda (which you learn to play in Chapter 3), or meeting other special conditions (clear all without healing, attack and defeat all monsters using a certain weapon, etc.). These conditions are unique to each floor.

Building up weapons is necessary for players to advance through dungeons. Both characters wield two weapons each: Max carries a Gun and a Wrench (or various Hammers) while Monica carries a Sword and an Armband which is capable of producing elemental magic.

Every defeated monster drops ABS, which are experience points. The weapon that deals the final blow is the weapon that will receive the ABS (if a monster is killed using an item, like a bomb, the ABS will be split equally between both weapons). When a weapon absorbs enough ABS, it levels up.

Each weapon has statistics which can be built up: Attack, Durable, Flame, Chill, Cyclone, Lightning, Excorcism, Smash, Beast, and Scale. Each Synth Sphere can raise any of these stats by a certain amount of points. In order to build up a weapon, certain stats must be built up to a certain level (you can see which stats need to be built up by choosing Build Up and focusing on the stats in red). When these requirements are met, a weapon can build up into another weapon, which is stronger and has higher maximum stats than its predecessor.

Every enemy is affected by a certain elemental stat. For example, a Fire Gemron's weakness is cold, so a weapon with a high Chill stat will defeat it easily. A strong weapon has balanced stats which can deal a good amount of damage to all types of enemies.

Weapons have WHP (Weapon Hit Points). Every time, a weapon is used, WHP decreases. Eventually, if left unrepaired, a weapon can "break" and become useless until repaired with a Repair Powder. There are three different types of Repair Powder: the normal type used to repair both characters' right hand weapons, Armband Repair Powder, and Gun Repair Powder. 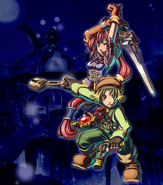 Poster
Add a photo to this gallery

Retrieved from "https://darkcloud.fandom.com/wiki/Dark_Chronicle?oldid=34975"
Community content is available under CC-BY-SA unless otherwise noted.