Better image needed
An image on this page has quality issues that need to be rectified. Please help the Dark Cloud Wiki by editing or replacing it with a better version.

Emperor Griffon is the main antagonist of Dark Chronicle. He is the wielder of the Orange Atlamillia, and because of this, incredibly strong. People depict him as a powerful, large griffon monster with glowing red eyes and fangs - but this is a lie. Griffon is actually a Moon Person, and his real name is Sirus. He has a passion for flowers, this is obvious because during the first battle with him, he uses roses as a weapon. He destroyed the flower garden of Moon Flower Palace as the mere sight of it reminded him of Alexandra.

His real name is Sirus, which was given to him by Alexandra, the Queen of Moon Flower Palace. During an attack by unmentioned enemies, Alexandra ordered him to flee and leave her to die with her kingdom. After succumbing to his sorrow and hatred toward humans for taking everything away from him, he created the Dark Element, which in turn, possessed him. Sirus` normal form is a Moon person, so he looks like a rabbit. When he steals Max and Monica's Atlamillia, he turns into the true Emperor Griffon. He uses roses as projectiles during the first ecounter - after that he relies on the Atlamillia, magic fire projectiles, and shockwaves. 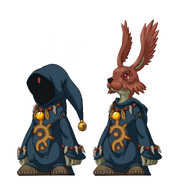 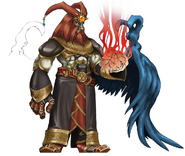 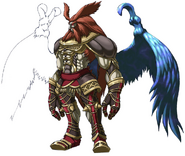