Better image needed
An image on this page has quality issues that need to be rectified. Please help the Dark Cloud Wiki by editing or replacing it with a better version.

22 (locations)
The Moon Flower Palace is a location and dungeon in Dark Chronicle. It's also where the final chapter, Palace of Flowers, takes place.

This palace, being briefly visited in Chapter 6 in order to fight Griffon for the first time in the game, is also where the Chapter 7 takes place, after the Chrono Union which takes the palace to Max's Time.

Being owned by Alexandra in which Sirus lives, she asks Max and Monica to collect Georama pieces to reconstruct the garden and try to brings back Sirus' memories to him.

The Moon Flower Palace consists of 3 main areas and 1 sublocation.

The Moon Flower Palace has the most frustrating Georama of them all. Simply because you have very little freedom to place the Georama Parts and because every conditions are blocked. You must rely on the images located in the Palace's foyer to rebuild the Garden.

Fortunately, you do not have to worry about running out of Polyns as this Georama simply do not have any Polyns count. It's also the only one where you can only build the exact number of Georama Parts, Georama Parts which are also only exclusive to this Chapter.

In order to entirely complete this Georama you'll need to spend exactly 8860 Gildas to buy all the necessary materials to build the Special Parts.

The maximum of each piece is as follows:

Something to consider when doing this Georama is that this is a very symmetrical area. If you have multiple pieces and are doing something to one side, the odds are that same thing is being done to the opposing side. Another important consideration is that lee-way is given to you so that you don't have to copy the pictures exactly.

The Scent Of Water In The Sun: The Fountain piece needs to be placed somewhat in the center, lining up with the stairs of the palace, and the gate of the area entrance.

The Door and The Moon Column: There should be eight moon columns on either side of the fountain, four on the left hand side and four on the right hand side. They should be touching the flower section of the Road to Goldbad pieces.

The Path of the Sun: The two points of the fountain(left and right) that are not touching Road to Goldbad pieces should have roads leading from them. There should be two roads leading from either side, followed by a Starlight Stair(See: A Stream and a Starlight Stair), an optional third road can be placed at the end of the stair though it is not necessary to complete the Georama requirement

Flower Bed of Recollections: Go to the farthest edge of the map, towards the Moon Flower Palace. Go to the left-side river. If a two road gap was left in The Path of The Sun, then four flower beds should be able to be placed(two on either side of the river) at the top edge of the map. Only two flower beds are needed in this position to complete the Georama requirements. In addition to this, two more flower beds can be placed directly below the Starlight Stair on either side of the river, though this is not needed.

You, sitting by the stairs: Place the Palace Stairs towards the top section of the river on the right hand side. To the right of the stair, place a silver bench. Only one is needed to complete Georama requirements, though you can once again build two, side by side.

Moon Flower Palace is the sixth dungeon in Dark Chronicle and takes place during Chapter 7: Palace of Flowers. While its georama location bears the same name, which is the courtyard of the palace, the dungeon itself consists of the inside of the palace. The gate key used is the Queen's Watering Pot, used to open the petals of a giant flower and advance to the next floor. Getting through blocked paths requires the Clock Hand, which is used as a giant handle to open a locked circular door.

There are three stylistic versions of the Moon Flower Palace. The first style is a purple themed hallway with purple chandeliers, blue flowers, and a blue space-like effect beneath the broken glass on the walkways. It appears from the beginning of the dungeon, following the moon path and ending in Alexandra's Room. The second is a green and red themed hallway with a red carpet, yellow chandeliers, green flowers, and the same blue effect beneath the glass on the walkways. It appears in the sun path after Zombie Zone and ends in the Garden. The third is a white and red themed hallway with yellow chandeliers, orange flowers, and a pink space-like effect beneath the flower-shaped glass on the walkways. It appears after Alexandra's Room and ends in the Sun Chamber. These styles do not affect gameplay mechanics or dungeon structure.

The time trial medals here are very easy to obtain, as every floor is given lots of time to defeat every monster, collect abs and gilda, and open every chest. As long as you aren't needlessly wandering around the map, you should be fine.

Spheda is arguably the easiest in Moon Flower Palace out of any of the dungeons, as there are almost no off-course areas, and the walls are flat for the most part. One thing to watch out for is the chandeliers hanging in the hallways - if you shoot too high, the ball will mostly bounce right back toward you. Additionally, you can get the ball stuck at the edge of the walls, simply move it to a nearby location by using the square button. Any spheda club will do, choose whatever feels best. Other than that, spheda is very straightforward here and not many tips are needed.

Like with earlier item-only stages, Poison Apples can be used to weaken most of the enemies, and Holy Water can be used against undead enemies. Improved Bombs and Final Bombs are recommended for taking down larger foes. Elemental Stones truly shine in the Moon Flower Palace, as many enemies have elemental weaknesses, and you have a decent chance of finding stones in the randomly generated chests. There are also very few aerial enemies in Moon Flower Palace, which makes earning the medal less tedious.

Feeling Out of Place[edit | edit source]

The Garden is accessed by taking the sun path in Zombie Zone. This is an event floor where the player obtains the Flower of the Sun from the table in the back of the room. This item is required to advance past Alexandra's Room later in the dungeon.

Alexandra's Room is accessed by taking the moon path in Zombie Zone. This is an event floor requiring the player to obtain the key item Flower of the Sun from the Garden event floor. Using the flower on the vase on the table will trigger a cut scene, opening the corridors to the next floor, and allowing the player to advance.

For the boss battle with Emperor Griffon, see Griffon.

If you enter the Sun Chamber before progressing in Moon Flower Palace's georama, the guardian will not allow you to proceed to fight Griffon. After completing the georama to 100%, you must speak Griffon's true name, Sirus, to the guardian of the Sun Chamber. The doors will open, and you will have the opportunity to fight Griffon at his full power.

After defeating Griffon, the Dark Element will arise as the evil that has infected his heart. The Dark Element will manifest the Spiral of Dreams for you to fight seven additional bosses, including himself. Each of the bosses are straightforward, as they are variations of earlier monsters fought. However, once you reach the Dark Element, the moon will begin to fall, and you will have a time limit of five minutes to defeat him. Defeating the Dark Element will result in the first ending of the game. 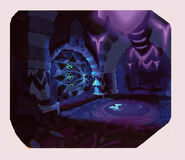 Concept art of Moon Flower Palace's garden
Add a photo to this gallery
Locations in the Dark Cloud series
Retrieved from "https://darkcloud.fandom.com/wiki/Moon_Flower_Palace?oldid=36018"
Community content is available under CC-BY-SA unless otherwise noted.