Edit
Image needed
This article or its infobox is missing one or more images. You can help the Dark Cloud Wiki by uploading one.

Death Ark, Gaspard, Inferno
Mount Gundor is the fifth dungeon in Dark Chronicle and takes place during Chapter 5: Conflict of the Past and Future. Mount Gundor is a mighty volcano located in Heim Rada, and contains the deadly Fire Squall that is raining embers over Heim Rada, inhibiting Max and Monica's restoration efforts by being unable to place flammable structures.

The Mount Gundor floors up to the peak are mountainous in nature, with steam crevices along the edges of the walls, and geysers being used to advance up the mountain. The gate key used for this portion of the dungeon is the Magma Stone, and getting through blocked paths requires the Stone T. After traversing to the peak, the passage to the mouth of Mount Gundor will be more cave-like and filled with lava. The gate key used is the Rope, and getting through blocked paths requires the White Wind Vase.

The summit of Mount Gundor itself, where the Fire Squall was installed to use the lava and magma of the volcano to rain embers down on Heim Rada, preventing the building of any flammable structures. Once the Fire Squall is destroyed, the Death Ark arrives to deal with Max and Monica personally, using machine guns and cannon fire to attack Max as he retaliates with the Ridepod and its long-range weaponry until sending the airship down into the mouth of the volcanic mountain.

The heart of Mount Gundor itself, the bottom of the crater that the Death Ark fell into. Max arrives to find Gaspard and Monica survived the crash of the airship, but Monica is unconscious. After fighting Gaspard and besting him, Max reveals he's fighting Gaspard because he's threatening Max's mom, Elena. Amused by Max's reasons for fighting him, Gaspard, once Monica comes to and tries to attack him, but is repulsed, explains his reasons for fighting them. After telling them his life story and gaining their sympathy, Gaspard offers to join the rebellion against Griffon, but is punished by Griffon himself with being turned into a fire demon that Max and Monica have to fight, mortally wounding him when the spell is broken.

From Mount Gundor and onward, the time trial medals are very easy to obtain, as every floor is given lots of time to defeat every monster, collect abs and gilda, and open every chest. As long as you aren't needlessly wandering around the map, you should be fine.

As always, bringing along Improved Bombs helps deal with many enemies, but in Mount Gundor, the Improved Bomb begins to lose its effectiveness, as some enemies require many hits before being taken down. Using Final Bombs will give the extra punch needed for some of the larger enemies. Various Elemental Stones can help deal with enemies that have an elemental weakness, and undead enemies can be dealt with Holy Water. Heart-Throb Cherries can help stop flying enemies such as the Stick Joe and the Gundrons, and everything else can be taken down with Poison Apples.

Spheda in Mount Gundor is extremely tedious and can be difficult. There are lots of areas where it can go off course, including the edges of the walls, and various steam or lava-filled holes. The walls and edges are jagged as well, and bouncing off them can be very inconsistent. Despite this, there is a benefit that lots of shots are often given, so taking small and carefully planned shots with the Turkey is usually the best way to not waste them. Additionally, the use of backspin can help prevent overshooting the ball into a hole.

Little Dragons on the Mountain[]

Desperation on the Mountain[]

Pains in the Neck[]

For the boss battle with the flying battleship, see Death Ark.

The peak of Mount Gundor has the Fire Squall, which has been raining embers over Heim Rada. If you haven't progressed much in the georama, you won't be able to destroy it, but if you have progressed, head to the future to obtain the Time Bomb from Garek. Planting the Time Bomb will destroy the Fire Squall, and allow you to build flammable (non-metal or non-brick) structures in Heim Rada.

After destroying the Fire Squall, Gaspard's flying battleship, the Death Ark, will appear and try to directly attack you. Monica will prompt Max to use the Ridepod, since it is their only means of counterattack. Be warned, this will be your last chance to snapshot a scoop of the flying battleship, so make sure to take a picture of it. You will also lose Monica for a short while after defeating it, but it will not inhibit time traveling via the time gate at georama sites.

Walking the Path of Flames[]

Road to the River of Flames[]

For the boss battle with Gaspard, see Gaspard.

Initially, the road to the mouth of Mount Gundor is blocked by a river of magma, and cannot be crossed until you nearly finish the georama. Head to the future to obtain the Fire Horn from Galen Agaris, and use it to clear the lava blocking your path. Taking a snapshot of the path and the fallen battleship inside the mouth will earn you scoops.

Inside the mouth, Gaspard will be present, alongside an unconscious Monica. Gaspard will engage with Max in a duel, and after defeating him, Monica will awaken. Gaspard will begin to have a change of heart, but Griffon forces him to fight, and transforms him into a giant monster. Take a snapshot of Gaspard's ultimate form for an additional scoop; defeating him will result in Gaspard's death and the completion of Heim Rada's georama.

Looking for the Fire Gem[]

Chamber of the Blazing Fire Gem[]

For the boss battle with Inferno, see Inferno (enemy).

The Inferno is necessary to defeat in order to collect the Fire Gem key item. Take a snapshot of the Fire Gem Altar to get an additional scoop before leaving. 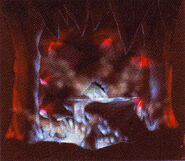