Edit
watch 01:40
The Sandman Will Keep You Awake - The Loop
Do you like this video?
Play Sound

The Ridepod (called Steve by Cedric) is a customizable and playable mech which Maximillian obtained near the beginning of Dark Chronicle. It is obtained at the same time that Photography was introduced during Chapter 1, after the first fight against Linda in the Channel Pump Room story segment of the Underground Water Channel dungeon.

During Max's fight with Linda, he was unable to damage the animal with his weapons. Partway through Cedric appeared, controlling the Ridepod, and proceeded to quickly and effortlessly pummel the creature, showing more agility and speed than is otherwise possible during normal gameplay. Although defeated, Flotsam restored the downed elephant and the Ridepod appeared to be unable to continue the fight, as Cedric had not yet finished the Energy Pack.

Forced to retreat, back at his store he gave Max the objective of inventing a new energy pack, telling him to photograph three items for ideas and to then invent and make the item. From then on Max would use the Ridepod regularly to fight large and dangerous enemies that he would otherwise not be able to take on on his own.

The Ridepod consists out of a body part with the controls, a series of levers, and driver on top, with an Energy Pack on the back. Although it has a set of bipedal legs as default, it can use various other means of transport, such as treads, skates, or a propeller blade. Its arms function as weapons, either ending in a short range melee weapon, or a mid to long-ranged weapon. Neither of them truly function as usable hands regardless. Notable is the Voice Unit, purchased from Cedric's Parts for 1000 EXP, it will let Steve make random comments while it is in use. It can be turned off and on again from the Core item in the inventory.

Despite the lack of proper hands, it can still open treasure chests. Items like rocks, crates and vases are untouchable unless you are using a pair of bipedal legs, which can destroy them by kicking (

while standing next to it). It cannot collect Geostones.

Instead of hit points the Ridepod has a fuel meter, which will automatically slowly drain as it is in use, as well as automatically losing quantities if damaged. It can only be replenished with Ridepod Fuel, occasionally found inside breakable rocks, crates and vases. It is also sold by Morton's Sundries and the Future Heim Rada Parts Store from Chapter 5 onwards. It can be invented and made on your own in Chapter 7. Until then, the only other available source is Cedric, who will replenish and restore the fuel meter for free at the cost of temporary skill points.

Fuel is a precious resource, as it is expensive and only five can be held in the inventory. Healing Springs and completing a dungeon floor will not restore the meter, thus using Cedric's free services is recommended to manage costs in the early game. The fuel meter cannot be increased with power up items, instead Max must invent, build and equip stronger Energy Packs to acquire the capability to carry more fuel on the go.

The Core is the heart of the Ridepod, and will determine its maximum defense and capacity stats. This means Cores effectively bottleneck the mech, as it must be upgraded before a better level of defense can be attained and stronger parts be installed. Cores cannot be invented and are instead only purchasable from Cedric's Parts for experience points (EXP), which is collected in place of ABS from defeated monsters.

Defense is gained from two sources, first from the Ridepod's body part and secondly from Shield Kits. The latter is the defense-raising power up item used for the Ridepod. They are only sold at Cedric's Parts and are all available at once, as long as the EXP costs can be paid. The starting price is 600 EXP, which increases with 10% after each purchase, up to a maximum of 4036 EXP, for 21 total Kits. As the Ridepod requires stronger Cores to raise the maximum level of Defense possible, it is imperative to upgrade Cores prior to acquiring Shield Kits. Body part defense is separate from this however.

The Ridepod will be noticeably more powerful than either Max or Monica early on, being both faster and stronger in all regards. Regardless, moderation is recommended, as either Max or Monica will still require capable weapons of their own eventually. Nevertheless it is the recommended weapon in use against Windup monsters, for nearly all other weapons are largely ineffective against these. Other large enemies such as the King Mimic, Dragon, Elfas, Tore, and Golem are also susceptible targets due to their size and strength.

When fighting, the Ridepod is unique in that it can keep moving at a normal speed while simultaneously attacking. If the situation allows; strafing, circling an enemy, or kiting them through a corridor are viable and highly effective maneuvers. Note that the type of leg part in use will noticeably affect your range of mobility and agility. The melee weapons have decent range for close encounters, but hitting flying enemies can be difficult. Ranged weapons are more versatile, featuring a larger range of options, but are unable to block attacks and will almost always require a lock-on to actually hit the target. Missed ranged attacks will still drain WHP.

Aside from the Core, the Ridepod is made out of parts. By default it will come with the Drum Can Body, Cannonball Arm, Iron Leg and the Energy Pack invented by Max. Each of these has a level of required Capacity points, with the level of the Core denoting the max amount of Capacity available. Thus, to equip better parts, the Core must be upgraded beforehand or parts must be downgraded.

All Ridepod parts, except Cores and Shield Kits, can be invented and build for an amiable price. Thus, it is recommended to avoid purchasing any through Cedric's Parts, as the EXP gained is better put into buying better Cores and more Shield Kits. To add, inventing always allows earlier access to better parts, with the best parts only being available through this method.

All of Steve's arms have four versions (I, II, III and IV) with each version being more powerful than its predecessor. Ridepod weapons are not upgraded through synthesizing, as such they cannot collect ABS.

It is impossible to equip the strongest ranged weapon, the Nova Cannon IV, with the Sun and Moon Armor, Triple-Urn Pack and the Jet Hover, as this puts it at exactly 305 capacity. The limit of the Master Grade Core is 300, thus one of the latter three must be downgraded if you desire maximum ranged power.

The body part makes up the bulk of the mech, and will determine its overal look, as well as affecting its level of defense to some degree. Note that although available right away, the Drum Can Body can only be invented in Chapter 5.

Energy Packs solely affect the Ridepod's fuel meter, which decreases over time and by taking damage. A better pack thus improves the Ridepod's sustainability no matter what, making them a valuable upgrade.

Leg parts are integral to the Ridepod's mobility, as the ability to more easily avoid enemy attacks and take less time to get around will ensure a lower fuel cost in the long run. The Propeller Leg and Jet Hover are the most maneuverable and fastest, only being eclipsed by the Buggy in the latter department. The Buggy is a unique case in that it has markedly different controls, making it largely useless for actual combat, though it fares well in getting around fast. These three are very useful for the Time Attack medals. Otherwise, the Iron leg and other three available early leg parts, the Caterpillar, Clown Foot and Bucket Leg, are all equal in terms of speed, thus making the Roller Foot a recommended upgrade when it becomes possible to invent and build.

Although relatively trivial, it should be noted that the Iron Leg, the Clown Foot, and the Bucket Leg can kick the small liftable objects that are occasionally strewn about a dungeon floor. However, the trajectory often varies, making this characteristic unreliable for combat, albeit convenient due to not needing to switch back to Max.

Melee arms can be used to both attack and block incoming attacks even while moving. However, unlike Max and Monica who can guard themselves at any time, even in the middle of a combo attack, The Ridepod must finish its attack animation before trying to block. As such, melee arms are best for a "hit and run" play style by landing a few hits and then retreating while blocking, or circling the enemy.

All melee arms have a three-hit combo sequence and stagger enemies on-hit, but the attack speed and damage varies somewhat per arm. The Drill Arm appears to be relatively weak, but makes up for it with multiple hits per attack. Comparatively the Hammer Arm appears strong, but has the slowest attack rate. The Samurai Arm is considered to dwarf all of them regardless, as it has both good damage, speed and range with especially the Samurai Arm IV carrying an impressive 1800 attack.

Ranged weapons have the clear advantage when it comes to range, with the downside of being unable to make enemies stagger for long nor being able to block. Being able to strafe while shooting makes up for it, though note that without a lock-on it is likely to miss almost every shot. They are quite varied in terms of function, with the Barrel Cannon, Nova Cannon and Machine Gun Arm being the most simplistic. The latter has low damage, but makes up for it with rate of fire. The Missile Pod Arm and Laser Arm are unique in that they each sent out a group of missiles and lasers, respectively, with a fair chance that some will miss entirely. 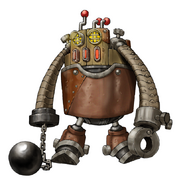 Ridepod parts in Dark Chronicle
Weapons by character in the Dark Cloud series
Community content is available under CC-BY-SA unless otherwise noted.
Advertisement